Spring Batch is designed with extensibility and a diverse group of end users in mind. The figure below shows a sketch of the layered architecture that supports the extensibility and ease of use for end-user developers. 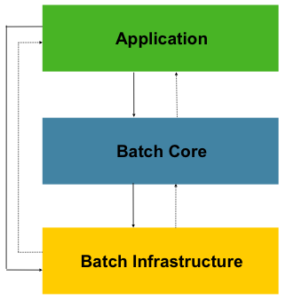 The Batch Core contains the core runtime classes necessary to launch and control a batch job. It includes things such as aJobLauncher, Job, and Step implementations. Both Application and Core are built on top of a common infrastructure.

This infrastructure contains common readers and writers, and services such as the RetryTemplate, which are used both by application developers(ItemReader and ItemWriter) and the core framework itself.

The Domain Language of Batch