This article will talk about JVM, JDK, and JRE.

As of JVM, you can imagine it as the engine for both JRE & JDK.

So let’s explain them in depth one by one.

This is generally referred as JVM. Before, we discuss about JVM lets see the phases of program execution.

For more detail about JVM please refer to JVM Tutorial

Phases are as follows:

So, now that we understood that the primary function of JVM is to execute the bytecode produced by compiler. Each operating system has different JVM, however the output they produce after execution of bytecode is same across all operating systems. That is why we call java as platform independent language.

As discussed above, javac compiler of JDK compiles the java source code into bytecode so that it can be executed by JVM. The bytecode is saved in a .class file by compiler.

While explaining JVM and bytecode, I have used the term JDK. Let’s discuss about it. As the name suggests this is complete java development kit that includes JRE (Java Runtime Environment), compilers and various tools like JavaDoc, Java debugger etc. In order to create, compile and run Java program you would need JDK installed on your computer.

These are the basic java terms that confuses beginners in java. For complete java glossary refer this Link.

Below is the realtionship between JDK&JRE&JVM 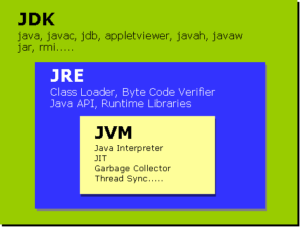 How To Install JDK with Apt-Get on Ubuntu 16.04