Before introducing hashing, let us review the map, which is a data structure that is implemented using hashing. Recall that a map is a container object that stores entries. Each entry contains two parts: a key and a value. The key also called a search key, is used to search for the corresponding value. For example, a dictionary can be stored in a map, in which the words are the keys and the definitions of the words are the values.

If you know the index of an element in the array, you can retrieve the element using the index in O(1) time. So does that mean we can store the values in an array and use the key as the index to find the value? The answer is yes—if you can map a key to an index. The array that stores the values is called a hash table. The function that maps a key to an index in the hash table is called a hash function. a hash function obtains an index from a key and uses the index to retrieve the value for the key. Hashing is a technique that retrieves the value using the index obtained from the key without performing a search. 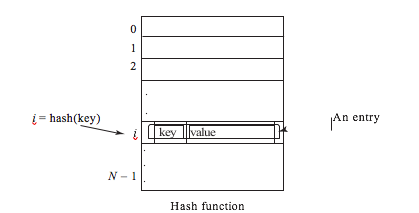